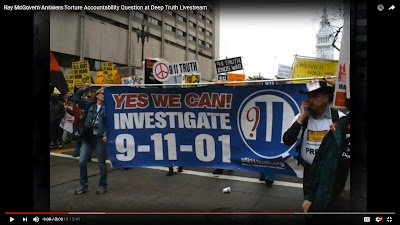 Allan Rees of No Lies Radio has called on me, Vic Sadot, to be a reporter at various times sing 2009 when I covered the protests against Berkeley Law Professor John Yoo for writing specious legal briefs to justify the use of torture, and the San Francisco protests against the war on Iraq in March 2009. On August 1, 2018 I covered the "Free Julian Assange" protests at the UK and Ecuadoran Consulates in San Francisco.
Bonnie Faulkner Speaking August 18, 2018 against the censorship of her Guns + Butter Radio Show during the "Public Comments" session of the "Town Hall Meeting". NoLiesRadio Report and Truth Troubadour YouTube Playlist "KPFA Censors Guns & Butter Radio".

Most recently I was asked to attend the KPFA Local Station Board meetings on August 1 and September 15 to report on the KPFA Management Censorship of Bonnie Faulkner's 17 year weekly program called Guns + Butter Radio. Bonnie Faulkner (2 m 45) “KPFA Censors Guns & Butter” - 5 Video “Truth Troubadour” Playlist Report on the “Public Comments” Session from regular monthly Public Meeting of the KPFA Local Station Board on Aug 18, 2018 in Berkeley, California. Video clip of Bonnie Faulkner Host of Guns and Butter Radio speaking out in Public Comments Town Hall Meeting against Censorship of her 17 year radio show and flushing her archives down the Memory Hole with "no due process" or "community involvement". Subscribe to Guns+ButterBlog! "Security" attempts to stop NoLiesRadio reporter from doing film report! Adding First Amendment Press Rights issue to problems with the elected representatives to the listener problem with Management suppression of show content. 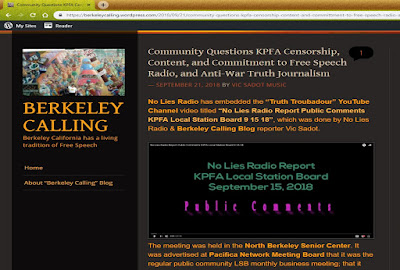 I picked Berkeley Calling Blog as the primary site to blog about the Censorship of Guns and Butter because the theme of that blog is the ongoing living tradition and struggle for free speech in the San Francisco Bay Area, and it clearly is a violation of the First Amendment and the spirit of the founders of KPFA, Lewis Hill and poet Richard Moore, who called for strong principles of pacifism and free speech. I post the reports and Truth Troubadour Blog and then they are embedded at NoLiesRadio.
BERKELEY CALLING BLOG September 1, 2018 by Vic Sadot: "Censorship of Guns& Butter Radio Show and Press Rights of NoLiesRadio at FreeSpeech Radio KPFA PACIFICA".