Celebrate 2012 MLK Day with “The Truth from the Trial” won by the King Family in Memphis in 1999!

Celebrate 2012 MLK Day with “The Truth from the Trial” won by the King Family in Memphis in 1999!

Let us celebrate the 2012 MLK DAY with the Truth from the Trial won by the King Family in 1999 in Mephis, Tennessee, the scene of the crime.


As Project Censored states it, we are in a crisis that may well be described as a "Truth Emergency". This has been a deep problem for US society for many years. However, it most certainly got accelerated after the exploitation of the 9/11 attacks to promote war, and a new wave of repressive laws named in Orwellian fashion as the so-called "Patriot Act" and "indefinite detention" in the National Defense Authorization Act signed by President Obama on New Year's Eve 2012.

Are you aware that the King family took a civil suit into a Memphis court in 1999 with William Pepper as their lawyer? They presented numerous witnesses who had been steadfastly avoided by the Memphis police and government investigators. Are you aware of any of the following information? If not, why not? If yes, will you be getting this information out as part of your 2012 observance of the life and legacy of Martin Luther King? Read on please...

William Pepper is a legendary American author, British barrister, and King family lawyer. Martin Luther King contacted William Pepper after reading an article Pepper had written in Ramparts magazine about the effects of the Vietnam War on the children of Vietnam. He invited Pepper to speak to his congregation, which was the beginning of a life-long friendship with MLK and his family. William Pepper continued to investigate the assassination of MLK for years, and he represented the King family in court.

The King family and William Pepper got considerable criticism in the mainstream press for stating that they did not believe that James Earl Ray was the killer of King. In 1999 they won a trial in a Memphis, Tennessee court from a jury of six whites and six blacks. They won a unanimous conviction of Loyd Jowers and “unnamed government conspirators” for the murder of Martin Luther King. King was executed in broad daylight at the Lorraine Motel on April 4, 1968. Jowers was the owner of Jim’s Grill across the street from the Lorraine Motel where some of the assassination planning was done. Jowers and waitresses from that era gave testimony in the 1999 trial that persuaded the American jury that there was a “conspiracy” to execute Dr King. William Pepper later wrote a book about the trial and the lack of fair or even any media coverage in the case of their victory. William Pepper’s book is called “An Act of State: The Execution of Martin Luther King”.

Here is a music video of a song that highlights some of the facts revealed in the 1999 trial and the book. The lyrics are below...

An Act of State: The Execution of Martin Luther King - A Music Video by Vic Sadot based on the book of the same title by King Family Lawyer, William Pepper, who won a civil trial for the King family in Memphis in 1999. Please watch and forward widely! "Vic, Thank you for taking the time to put some important history into a ballad. This, of course, is the role of the Balladeer without whom much of history would be lost, especially in our time with the consolidation of control of the mainstream media. I am grateful." Bill Pepper
http://www.youtube.com/watch?v=qHzJasPd1bc

One way to be true to the dream and the commitment of the Rev Dr King would be to get this information out into the sunlight of public discussion as part of this year's celebration of who he really was! He would be marching stalwartly on Obama's White House and on the now Republican-controlled Congress. The book is in public libraries. In truth we shall be free and overcome. 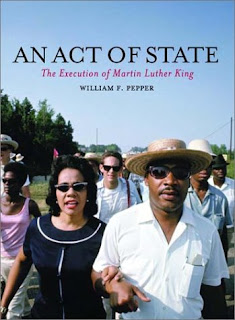 An Act of State: The Execution of Martin Luther King (Lyrics) (Chords GCEmAmD7G)

William Pepper was a young man when he first met Dr. King
Who read his war reporting on Viet children suffering (1 Ramparts magazine 1967)
Martin asked young William Pepper to speak about the war
To come to his congregation. And they were friends forevermore…

Then William went to law school to put his talents to the task
To fight for social justice! To answer questions we must ask!
It was April 4, 1968 when Martin Luther King
Was murdered in the broad day light… It was a devastating thing!

There was a mighty “Rush to Judgment” (2 Mark Lane on JFK hit)…To blame it on James Earl Ray
There was agreement in the government to tell the media what to say
The media called it “a crime of hate”… A “lone-nut” simple thing…
Now we know it was “An Act of State” (3 The book by William Pepper), the execution of Dr. King

James Earl Ray was just a patsy, an escaped prisoner for sure…
With a top security identity for the whole 9 months before…
Some rogues within the government shielded James as “Eric Galt”
Gave him a car and a driver's license to secure him ‘til the assault…

To protect this petty criminal… To put the patsy into place
His handler sent him to Memphis where like a pawn he showed his face
Well, Martin marched for Civil Rights! And he stood against all war!
He spoke for truth and justice, and non-violence for sure!

When Martin stood with the workers… in solidarity with the poor…
That high class oligarchy hated Martin. That’s for sure!
Earl Clark was one of the Memphis cops meeting at Loyd Jowers Grill
Across from the Lorraine Motel where Dr. King was killed

Too many unanswered questions still blowin’ in the wind...
In a murder investigation so deliberately ruined
Too many disturbing answers still came out in the trial...
Enough to prove conspiracy to a nation in denial

Six white and six black jurors unanimously agreed
The facts presented at the trial proved who really did the deed
Yes, it all came out in the trial that in ’99 they won!
When the government was convicted of the conspiracy they’d done

William Pepper was the lawyer who won the case in court
But when he went to the press conference no reporters came to report
So here’s to William Pepper! The King Family, brave and wise!
For standing for the truth for us! For overcoming all the lies!

William Pepper, keep on struggling! You know you’re following…
The teachings, and the vision, and the dream of Dr. King!
William Pepper wrote a book about the trial and everything…
An Act of State: The Execution of Martin Luther King (repeat last line slowly to end)