Ken O'Keefe is calling his speaking tour the "Fuck the USSA/TSA/Homeland Security Tour". See the video link and statement below to understand what can happen to you that happened to Ken when he refused to go through the dangerous airport scanners that former "Homeland Security" chief Michael Chertoff is profiting from in his ongoing conflict of interest as a "public servant" with dual nationality loyalties and security equipment sales companies.

After event post of the video for this event: Ken O’Keefe in Berkeley - March 2016 - "Jewish Power" & World Citizen Solutions (1:52:50) Published on Mar 26, 2016 at Ken O'Keefe YouTube Channel. Original Post at 911Truth YouTube Channel by Hummux. “In this talk Ken rips into politically correct barriers and speaks frankly about the challenges we face in the cause of creating a better world. Ken finished his 'Fuck the TSA/Homeland Security Tour' with events in Montreal and Toronto, Canada. This is the Berkeley speech. 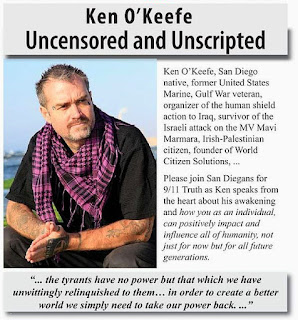 This Ken O'Keefe tour needs more event organizers along the way. You can find contact info, tour info, and lots of videos about the work of Ken O'Keefe at the BFUU Social Justice Committee event listing on Facebook.  SJC is sponsoring his Berkeley event in Historic Fellowship Hall at 1924 Cedar Street, Berkeley, CA 94709. 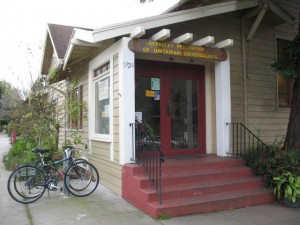 Historic Fellowship Hall entrance at 1924 Cedar Street.
The building is wheel-chair accessible from the ramp on the Bonita Avenue
side of the building, which is just past those bikes parked outside.
There are more bike parking spaces up that sidewalk.

Ken O’Keefe in Berkeley! Uncensored & Unscripted! Sunday, March 20 from 5:30 – 8 pm in Historic Fellowship Hall, 1924 Cedar Street, Berkeley, CA 94709. Note: We will be asking for donations to BFUU Social Justice Committee at the door. Our policy is: Suggested Donation $5 - 20. We have expenses to cover, such as our sound/tech people, and basic bills to pay. Please scale your donation so that you can also give a donation to support Ken's tour. We will pass baskets at some point during his presentation. Thanks for understanding SJC and Ken O'Keefe needs and for supporting us in this effort to bring Ken to Berkeley and to help him make the rest of his tour one with maximum impact on this country while he is here.

Ken O'Keefe speaks about TSA messing with his travel rights

Statement of Ken O'Keefe: "I am not surprised that the Orwellian TSA (Homeland Security) have denied me the ability to board a flight from LAX to Acapulco because I opted out of the body scanner procedure. I refused this as an ex-US Marine who has been given experimental injections and pills during the 1st Gulf War (along with 600,000 other American sons and daughters), these experimental drugs being administered without informed consent due to a “waiver’ provided by the Food & Drug Administration (FDA) of the US Government. Many have died from ‘Gulf War Syndrome’ due to these experimental drugs, essentially many have been murdered by the FDA and US Military who ordered American sons and daughters to take experimental drugs. I have in the past always opted out of the body scanner and agreed (under duress) to a physical body search, today I once again agreed to this under duress but again was told I MUST SUBMIT TO A BODY SCAN OR BE DENIED THE ABILITY TO TRAVEL/FLY. I have refused these terms, which inherently mean radiating myself with their dangerous body scanners."
Ken O'Keefe Update 2 on www.worldcitizen.solutions Campaign (9:19) Ken O'Keefe YouTube Channel. Published on Jan 30, 2016. An update on the campaign to fund the worldcitizen.solutions campaign.

Ken O’Keefe’s original marine conservation work has been somewhat overshadowed by his non-violent, but fully confrontational work for human rights. He is an ex-US marine and Gulf War Veteran, who formally renounced his US citizenship in 2001. O’ Keefe’s activities to date include founding Human Shield Action to Iraq (2003), serving as a captain on the first Free Gaza Mission (2008), surviving an Israeli attack on the ship Mavi Marmara (2010) and becoming Social Enterprise Managing Director of Aloha Palestine CIC and the Samouni Project.O’ Keefe is a published author and lecturer who now holds Irish, Hawaiian and Palestinian citizenship, but his ultimate allegiance is to his ‘entire human family’ and ‘Planet Earth’. His style of activism is characterised by his involvement in disarming two Israeli commandos as nine of his fellow Mavi Marmara passengers were executed. The Israeli military later claimed O’Keefe was a "terrorist operative of Hamas". O’Keefe has repeatedly stated that Israeli Mossad and its assets, along with traitorous elements within the US, are directly responsible for the ‘false flag’ 9/11 attacks. http://www.worldcitizen.uk.net

Posted by Truth Troubadour at 1:46 PM 6 comments: Links to this post