This one minute "Delaware Coastal Zone Act Preservation Promo" video by Vic Sadot is a free Creative Commons Copyright that you can either download for non-profit use, or you can simply share it by posting the link in emails and on Facebook.
Here's a Delaware Coastal Zone Act Defense Update Report! Last week the DE House caved in to Big Industry lobbyists and voted for allowing loopholes in the law that protects your water and the vital environment associated with it. The DE Senate vote has scheduled the HB190 "Reform" for WEDNESDAY 6/28 & THURSDAY 6/29.

You, your family, your community, and at least "Seven Generations Forward", are counting on you to NOT SLEEP WALK AT THIS TIME. Study up at the Delaware Coastal Zone Act page! Make some phone calls! Write something! Defend your interests! This is Common Ground stuff! Let your State Senators know who they are working for and that this one might make you not vote for them, or you may hold them legally responsible for toxic consequences from environmental poisoning in the future. #SaveTheCZA 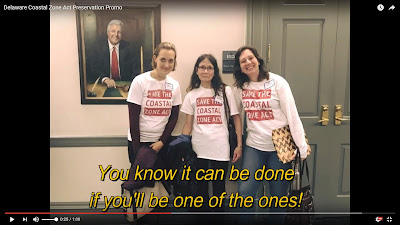 CZA activist Jeanne Sadot (center above) says, "This bill makes no sense. Except to allow the refinery to make bulk shipments of highly dangerous ethanol.... I'll let you know what happens, but it doesn't look good. Most people I've talked to in DE City have not even heard about this bill...probably the most affected area." 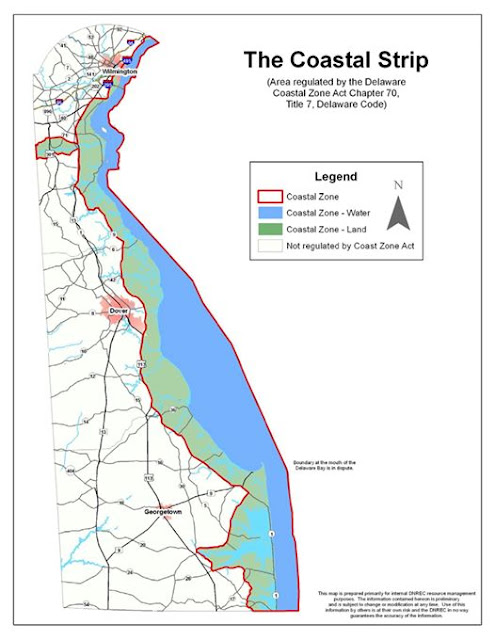 Here are some excerpts from Green Delaware Executive Director Alan Muller in the article from 6-05-17 titled "Strengthen,don’t gut, the Delaware Coastal Zone Act":
“Much of the near-fifty-years of Coastal Zone controversy has been rather stereotyped — business and union interests claiming damage to the economy, loss of jobs, etc., and environmental interests asserting the need to protect our natural resources and quality of life. For the most part, the Act has been chipped away at, and enforcement has often been weak. The last few years have been especially disastrous, with the Markell administration shutting down meaningful enforcement, handing out Coastal Zone permits like so many peanuts, and Delaware courts willfully misinterpreting the plain language of the Act to deny citizens “standing” to demand enforcement. The present Governor, John Carney, ran on a platform that included weakening of the Act…
The current proposed legislation, House Bill 190, would not leave much left of the Act. The prime sponsor, Rep. Ed. Osienski, is a retired construction union business agent. In spite of these problems, the Act has done a lot of good… Fifty years ago Delaware’s political system was able to recognize these realities and act somewhat effectively with a pioneering “coastal management” law. Has our collective wisdom so deteriorated that, in the face in increasing demands, we will choose to roll back, rather than strengthen, coastal protections?…
An impressive collection of Delaware’s non-governmental organizations are calling on legislators to withdraw SB 190 and set up a “stakeholder” review process to look at the Coastal Zone Act. Green Delaware supports this, but we note that such a process should (1) not be dominated by industrial/organized labor interests tied to the negative agenda revealed in SB 190,and (2) the focus should not be on weakening the act, but on strengthening it to meet the needs of present times…Those legislators need to hear from you NOW. ” Read the full article at Green Delaware "Strengthen, don't gut, the Delaware Coastal Zone Act". 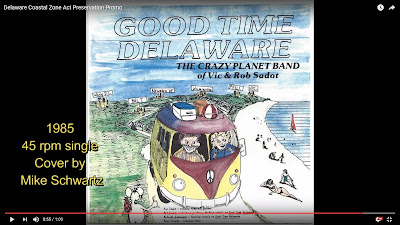 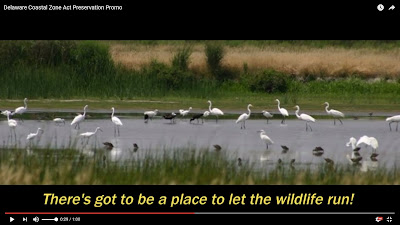