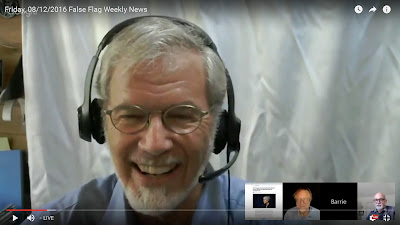 Hosts Kevin Barrett and Tony Hall were joined by author and news media analyst Barrie Zwicker for a rapid review of the past week’s news events. Every week on No Lies Radio news events are analyzed with screenshots and links given so that the viewer can look into the issues themselves. Barrie Zwicker is famous as the director of the documentary “The Great Conspiracy: The 9/11 News Special You Never Saw”, as the author of “Towers of Deception: The Media Cover-up of 9/11”, and as a well-known Canadian television personality for decades. Zwicker recently reviewed Kevin Barrett's book on Orlando in a column at Craig McKee's excellent "Truth and Shadows" Blog.

Click on the photo above to watch the Friday, 08/12/2016 False Flag Weekly News in the No Lies Radio archives. You can also watch the 1:01:04 long show at the noliesradio YouTube Channel. 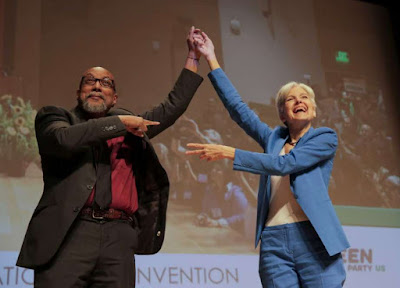 The new Vice Presidential candidate of the Green Party USA, human rights activist Ajamu Baraka, was the subject of a mass media attack on him as a “holocaust denier” by virtue of his having been on this very show, “False Flag Weekly News” on No Lies Radio. Green Party Presidential nominee invited Baraka to join her on the ticket as the VP candidate.

The central claim or smear against Ajamu Baraka was to name him as a “holocaust denier” in a classic and unfounded "guilt-by-association" technique for having appeared on the show with a said-to-be known “holocaust denier, host Kevin Barrett, PhD. 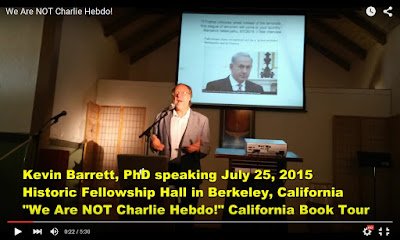 Barrett is scheduled for a return speaking engagement
at Historic Fellowship Hall on October 16, 2016 from 7:30 - 9:30 pm
to talk about his new book "Orlando False Flag: The Clash of Histories".

Dr. Kevin Barrett is the author of many books critical of the media and the Orwellian-applied and weaponized terminology used to market and brainwash people about the “war on terror”.

The lead-in story involving Green Party Vice Presidential candidate Ajamu Baraka and his association with Kevin Barrett was addressed by Barrett himself. He stated that he has never written about the holocaust, but he has defended anyone and everyone’s right to research that history and any other subject they want to research and speak about.

Kevin Barrett stated: “It is interesting that they will call you a ‘holocaust denier’ even if you don’t take any position on what really happened in those camps in WWII. I never have! I don’t know precisely how many people died, how many of them were Jewish, how they died, whether there was an extermination order, whether there were gas chambers, etc, etc, etc. These issues are debated by other people. All I say is it’s ok to debate these issues. You shouldn’t go to jail if you’ve come to a particular conclusion about these issues! So, if you oppose the witch hunt, you’re a witch! So I guess I’m a witch…” 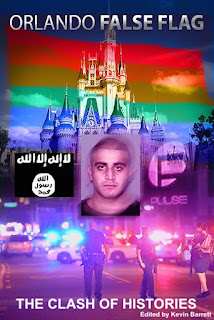 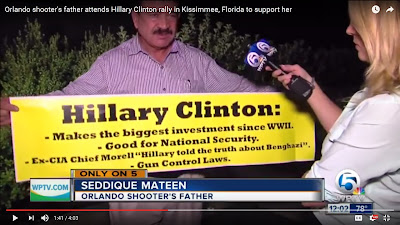 Seddique Mateen, an Afghani Taliban living in the USA, the alleged father of the alleged killer  Omar Mateen of the alleged massacre at the Pulse Gay Night Club was spotted sitting behind Hillary Clinton at her Kissimme, Florida campaign rally by an astute young reporter for WPTV News of West Palm Beach, Florida named Tory Dunham. Screenshot by Vic Sadot


The second story is about Kevin Barrett’s latest book about the Orlando Pulse Night Club False Flag Shooting incident in Florida on 6-11-16. This past week’s news story related to that incident was discovered by a local news team covering the Hillary Clinton campaign rally in Kissimme, Florida. A young reporter claims she ran into Seddique Matteen, the father of the alleged killer Omar Mateen, at a roadside stop where he displayed his banner to her and gave some comments to explain why he was in a high profile spot at Clinton's rally. The local news reporter found it odd that the alleged killer’s father would be so prominently placed behind Hillary Clinton at her recent campaign speech in Kissemme, Florida. Those spots which appear in TV broadcasts are staged by campaign managers to give a look of diversity. So it is not an accident when someone gets the back-drop seats to a Presidential candidate’s televised events. Guest commentator Barry Zwicker, a famous Canadian media anyalyst, points to the father’s demeanor as not one of a grieving father, but rather one of another bad crisis actor. 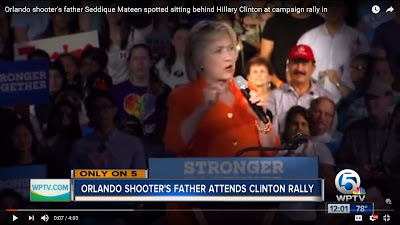 Other stories covered in this episode of False Flag Weekly News are listed below and the are listed at No Lies Radio with the links to them. Especially recommended: The “anti-semitic” labeling campaign of vilification of a PhD Professor at Oberlin College named Joy Karega; Noam Chomsky’s role in shutting down questions and investigations into 9/11 since his rapidly deployed November 2001 book titled “9/11” used ridicule instead of logic as its main “persuasive” mechanism;

Vic Sadot Note: My songs are in rotation at No Lies Radio. I have also served as a reporter for No Lies Radio at anti-war and torture accountability events. I have twice filled in as a guest host on the False Flag Weekly Show and I’m one of many people who sends in stories for consideration to the weekly news show. And I provided the first two screenshots in this particular show.

Truth Troubadour Blogs end with a song! Here's one for today!


"Full SpectrumDominance" (6:04) Published on April 18, 2016 at #TruthTroubadour YouTube: “Beware of those who joke about sending in the drones!” This song was written by Vic Sadot​ for the 4-10-11 visit of Bruce Gagnon​ to speak at Fellowship Hall in Berkeley, CA. Bruce is the founder of the Global Network Against Weapons and Nuclear Power in Space​ (See www dot space4peace dot org). Vic Sadot on vocals and acoustic guitar, Rob Sadot on electric guitar, Eric Golub​ is on violin. Full Spectrum Dominance makes us all the “enemy”!

Other links to explore:

7) Karega’s views in context: 9/11 and Zionism: Is Chomsky a disinfo agent for Israel?

14) Democratic Strategist Calls For The Assassination Of Julian Assange