In 2014 some members of the Northern California 9/11 Truth Alliance called for an expanded exploration of issues at the upcoming 2015 annual 9/11 Truth Film Festival at the elegant Grand Lake Theater in Oakland, CA. We called for some more recent events that are widely suspected of being false flags to be scrutinized. The theme for 2015 was "The Myth & the Maintenance" (of the myth/lie).

The members pushing for dealing with additional focus at the approaching 14th anniversary of the 9/11 and Anthrax attack crimes suggested including films that investigated 3 major events: (1) The alleged massacre of Sandy Hook, Newtown, CT school children of 12/14/12; (2) The alleged bombings, abandonment of normal emergency protocols, and the 4th amendment violations caused by the imposition of Martial Law in Boston on 2-15-13; (3) The alleged events known as "Charlie Hebdo" in Paris, France starting on 1-07-15.

I personally spent countless hours researching, evaluating, and downloading films, which I burned to two DVD's. I gave both DVD's to about 20 NCA911TA members over several weeks time in the spring of 2015. In other words, I submitted 25 mostly short videos for consideration at the one day festival. 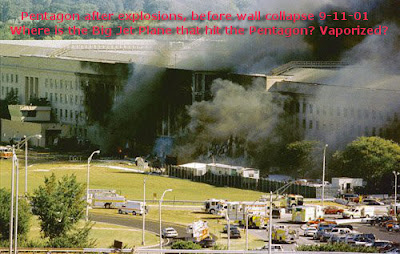 
This presentation of possible films for the 2015 NCA911TA by Vic Sadot was completely derailed from consideration by the aftermath of the discovery that the Coordinator of the 2014 film festival, Ken Jenkins, had censored the entire Pentagon section of Italian film director Massimo (Max) Mazzucco's "September 11: The New Pearl Harbor". His Pentagon chapter was not screened at the film's debut screening in the San Francisco Bay Area at the 2014 film fest at the Grand Lake Theater. This was done without informing the director or the group's members. The fallout over this matter created a difficult situation for focusing on the 2015 festival.
This censorship of Mazzucco was not discovered until late September after the 9/10/14 film festival was over. Jenkins was selling look-alike copies at NCA911TA meetings of Sept 11: The New Pearl Harbor without the Pentagon section included. What set off alarms for some members was that Jenkins' sales pitch was that, thanks to his "editing" of Mazzucco's copyrighted work, you could buy "the science safe version, the one we showed at the festival". Dave Heller rightly pointed out that in addition to censorship, the sale of the director's film without authorization or compensation to him could have a legal and financial impact on NCA911TA. Heller was also concerned that, if NCA911TA was operating "under the legal umbrella" of AE911Truth's non-profit 501c3 status, it could impact on AE911Truth as well. Expressing these concerns was countered by Jenkins with the characterization that it was all a personal campaign against him. , but he eventually admitted that he made mistakes".

The story on that controversy is covered in a previous blog at this link, which I will list here as Vic Sadot Expelled from Northern California 9/11 TruthAlliance in Quickie Vote on 6-04-15 Truth Troubadour Blog What I want to accomplish in this new blog is to show how the attempt to block the establishment of Protocols, as well as the expulsion of the NCA911TA censorship whistle-blower Vic Sadot effectively removed all of these films from consideration for 2015. So one remedy for me is to present them here with hot links and offer them as "An Alternative 9/11 Truth & False Flags Film Festival". I hope you like what's been gathered here for that purpose.

In summary, the remedies sought were for the censorship problem should have been simple and easy to enact: (1) Offer an apology to Max Mazzucco; (2) Create protocol guidelines that could be used to monitor how the group would be "represented" to film directors in the future. The apology came after many tense meetings in which "censorship" was denied by Jenkins and several other members in spite of correspondence from Mazzucco himself calling it in "censorship". 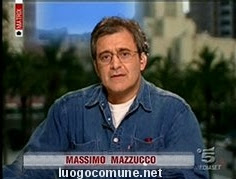 The December 2014 approved group apology to Mazzucco included a pledge to set up protocols. I wrote a draft list of guidelines in January 2015 in consultation with Dave Heller. Oddly, many more months followed at which I would put the matter on meeting agendas and a certain "facilitator" would make sure that the time ran out and that the meetings closed without getting to the item. There were assurances that we would get to it next time, but it turned into a power-tripping game to prevent the protocols from being set up.

Finally, I was expelled on June 5, 2015 for being "divisive" and "not a good match" for NCA911TA. Some members attended meetings to challenge my expulsion and to defend my 7 years of membership and service. But they felt that they needed to prioritize the passage of protocols over trying to de-legitimize the sudden un-announced expulsion of me by 5 members. The effect of that "deal" was that they did get a watered down version of Protocols passed in July 2015 and they made a "deal" to revisit the question of Vic's membership after the 2015 festival in September. The effect of that "deal" was that all of the films listed below got no consideration whatsoever. None listed here were included in the 2015 festival. In September I attended the first meeting after the festival. Carol Brouillet called me on the phone to request that I no longer attend meetings, saying that I was the cause of "divisiveness" and "unpleasant meetings". I told her that she was turning a blind eye to behavior that negatively impacted on the reputation of NCA911TA and the 9/11 Truth movement by taking this stand. It could have all been handled quietly within the group as I had tried to do for about 9 months. In fact, I never went public until my expulsion.

The small group apparently voted to keep the ban on me, Vic Sadot, from attending meetings without putting anything in writing. Here are the films that I submitted for consideration and links to them where possible. These films could have been used in the 2015 festival. But they were never seriously discussed, and I was not there to press for them to be discussed. Since nothing was ever done in writing, one can only suspect whether or not these film submissions were one more reason to not want me at meetings of NCA911TA. 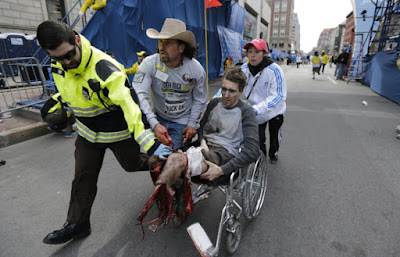 This photo of the two main "heroes" of the Boston Martial Law Firecracker event shows Carlos Arredondo, instead of medical rescue professionals, breaking emergency protocols by placing a man said to be named Jeff Bauman in a wheel-chair, a man who allegedly had just lost two legs! Normal protocols would call for the victim to be placed flat on his back on a stretcher with his legs professionally tourniquetted and raised so that he would not bleed to death. Why is there no trail of blood behind this wheel-chair that has already come a city block from the alleged bomb scene? The story gets wilder when you realize that Jeff Bauman was also a "hero" for identifying the Tsarnaev brothers when he woke up in the hospital after alleged surgery.

Bauman recovered from his loss of two legs so rapidly that in one interview he said his doctors called him a "wolverine". He actually left the hospital after only 11 days! How is that possible? Don't ask unless you want to be called a crazy conspiracy theorist! Then Bauman led a cheering crowd at a Boston Bruins hockey game just 19 days after allegedly losing his legs. Such miracles happen when you are "Boston Strong". Bauman was sitting up, smiling, and waving a "Boston Strong" flag at the Bruins game. Yet people believed this impossible story. Few Americans complained about the violations of the 4th Amendment right of the people to be secure in their property and houses when ten thousand militarized police and soldiers went on house to house searches for the one remaining brother. The first and older brother was allegedly killed by his younger brother after he was taken into custody by the police. Russ Baker of Who What Why has done some good scrutinizing of this impossible "real life story". (See #3 above) 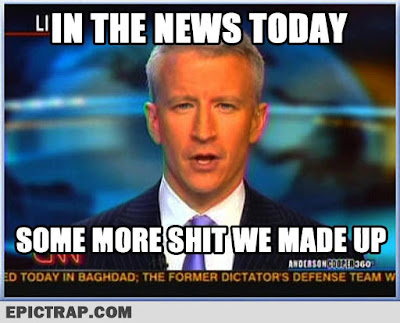 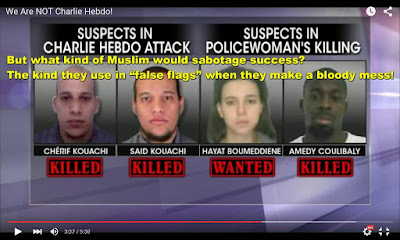 1 Learn History With Philip Zelikow (28:30) James Corbett - A look into the person who led the 9/11 Commission as Executive Director when he should have been investigated in his capacity as Assistant National Security Director to Condoleezza Rice, two key suspects who failed to protect the American people from the attacks of 9/11. https://youtu.be/sQtvhpOLUmM
2 Cameron Declares War on 9-11 + 7-7 Truthers + Links them to Terrorists (Islamic State) (5:58) DJsNorthWest This would have been a timely alert to truth activists on how the British counterpart to Obama was attempting to demonize truth seekers. For a one day event, more 6 minute clips would work than long movies that ostensibly are needed to be edited for time by Ken Jenkins. http://youtu.be/rcsEkcs-trs
3 Money Trails, Whistleblowers & Government Secrets + Lies with Scott Bennett (50:54) TheLipTV ouTube Channel. Interview by Sean Stone. Creative Commons. https://youtu.be/QCSVHWl6Xs0
4 Charlie Hebdo Shooting: Paris Attack Hoax NWO Exposé (Documentary) (33:48) RedSilverJ
https://youtu.be/WVI8_6gTrDg
5 Rule From The Shadows (37:20) Storm Clouds Gathering on the history of media manipulation
https://youtu.be/p8ERfxWouXs
6 We Need To Talk About Sandy Hook (2:46:42) Independent Media Solidarity – Edited by Peter Klein https://youtu.be/IxTafqejV6k
7 Sandy Hook Finally Answered Part I (22:11) Crisis Actor (Scott Wilson in Connecticut)
https://youtu.be/O8-HNOgZgYI
8 5 Minute Speech That Got Judge Napolitano Fired (4:59) UniBrowStudioVision YouTube
https://youtu.be/UgGnBCDfCLM

Videos on first round of Disc #2 that are not on the latest since Barbara Honegger had given copies to NCA911TA members in person herself. (Numbers 2, 3, and 7 are new to DVD #2)
1 9/11 Museum Virtual Walking Tour (1:58:22) freeseattle YouTube featuring Barbara Honegger and Bonnie Faulkner as your tour guides. With the opening of the new 9/11 Myth Museum in New York City there was an attempt to sanctify the lies. What a missed opportunity it was to not show this new film in 2015! https://youtu.be/2qir4RsNZCk
2 Paris Attacks: History of false flags, media war, & build-up to WWIII (50:12) HashemStudios.com https://youtu.be/G9iobBnULDg
Posted by Truth Troubadour at 7:31 PM No comments: