Two of Vic Sadot's CD's were featured in a segment of the annual "Truth Music Playlist" for Summer 2018 by CorbettReport. The link to the full "Summer 2018" edition that this 3 minute 38 second excerpt comes from is below.

Truth Music Playlist – Summer 2018 The Corbett Report. In his annual “Truth Music Report” at 6:55 James features links to 2 of my CD’s at CD Baby and plays a segment of The Ballad of William Rodriguez.


At 6 minutes & 55 seonds into the 13 minute, 20 seond presentation James mentions the "9/11 Truth & Justice Songs" CD released by Vic Sadot on 9/11/11 at the 10th Anniversary of that tragic event. He also mentions the "Truth Troubadour" CD from Dec 2016 featuring Eric Golub on violins, violas, and ukuleles.


James Corbett plays part of "The Ballad of William Rodriguez". The way that song happened was that Vic was invited to sing at the July 2005 "Truth Emergency Convergence" in Washington, DC. "Mad Cowboy Disease" and "Are You A Citizen Or Are You A Slave" were a couple of Vic's 9/11 Truth themed songs. They were first sung at American University and in Lafayette Square across from the White House. Vic met David Slesinger and David suggested that Vic interview Willie and write a ballad to tell his story. Willie was head janitor of the World Trade Center and jumped into rescue mode after he heard explosions in the basement below him. His fellow WTC worker and friend Felipe was burned in the elevator shaft. Felipe came into the Maintenance office with burned skin hanging from his face and arms and shouting "Explosion! Explosion!" Vic and Willie did the interview over the phone. Vic and Willie met on Sept 11, 2005 in New York City when Vic sang and Willie spoke at the 9/11 Truth rally at UN Plaza and again later at St Mark's Church with Father Frank Morales. "Cheney's in the Bunker" came soon after while reading a David Ray Griffin book, "The 9/11 Commission Report: Omissions & Distortions". 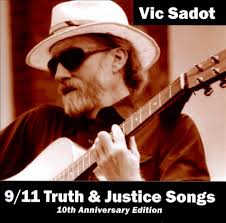 Here are the CD Baby links to the 2 Vic Sadot CD's mentioned in Corbett Report "Truth Music Playlist for Summer of 2018":

There's something professional yet friendly and assuring in the James Corbett style and methodology that has won him widespread respect and listenership. He can do the short focused expose with a few wry comedy knock-out punch lines; the long investigative documentary report, such as "A Century of Enslavement: The History of the Federal Reserve; or he can create well-crafter and researched playlists like "9/11 Suspects".

Century of Enslavement: The History of the Federal Reserve – A Documentary by James Corbett Published on July 6, 2014 (1 h 30 m 11)


Posted by Truth Troubadour at 12:45 AM No comments: Links to this post


John LaForge of NukeWatchInfo.org presented an engaging power-point
lecture about publishing the revised edition of the book “Nuclear Heartland”, which was updated from the original 1988 edition. Johns spoke in Historic Fellowship Hall in Berkeley, CA on October 13, 2016. It was a book celebration event sponsored by the BFUU Social Justice Committee.

See PEGMedia for Public Access Cable TV non-profit use of this video!

John LaForge can be contacted at jmichaellaforge@yahoo.com


Cynthia Jean Johnson arranged for the event, which author Cecile Pineda had proposed; Jane Eislie, a long-term supporter of Nukewatch was there. Audio was by Dave Yandle. Post production by Vic Sadot.The video was first published by content creator Vic Sadot to the BFUU Social Justice Committee website, "SOCIAL JUSTICE IN THE HEART OF BERKELEY". It has also been published at other sites, such as Vic Sadot Vimeo and 911TVorg YouTube Channel. It is a Creative Commons Copyright with attribution credits and no edits. This video is available for free download and non-profit use. It has been formatted for Public Access Cable TV non-profit use with full crdits/no edits.
PEGMedia for Episode: John M. LaForge 2017 “Nuclear Heartland USA” HD (57 m 48).

Truth Troubadour Song for this blog! Ride the Wind (5:33) 9/11 Truth & Justice Songs CD by Vic Sadot on CD Baby’s YouTube Playlist - Lyrics: “Cold winds blow across the land. Dark clouds gather gloom. Children wake up crying! Parents rush into the room! It’s just another nightmare of impending days of doom. But we’re gonna tear Your Terror down! And make the deserts bloom! Yeah, that’s what we assume!” In the post 9/11 world the lyrics take on a new meaning about the phony "War on Terror".


Posted by Truth Troubadour at 3:30 PM No comments: Links to this post

nomadiceveryman: KPFA Shuts Down Guns and Butter: This just breaks my heart. Guns and Butter is a great program and has been since 2001. Thank you Vic for the heads up.

This Nomadic Everyman Blog at Blogger is the temporary home of American Everyman, which Google censored along with a lot of other blogs on grounds of "community standards". Willy Loman, aka Scott Creighton, also lost his YouTube interface channel called American Everyman, and continues to publish on a back-up channel called ChurchDog42. This is part of a nationwide cross-platform corporate censorship of freedom of speech rights on grounds of private ownership of the platforms and the tiny print statements we all sign without reading known as "Terms of Service" agreements. We wrongly assume that someone in this allegedly Constitutional democratic republic is looking out for the common person. That is a wrong assumption when money is the real ruler of the nation.

Yesterday, he published this video about the KPFA management Censorship of a popular 17 year once-a-week radio program called "Guns & Butter" and wiped out all 17 years of programs in the archives!

KPFA Shuts Down Guns and Butter (24 m 59) Published on Aug 22, 2018 ChurchDog24 YouTube Channel. This just breaks my heart. Guns and Butter is a great program and has been since 2001. Thank you Vic for the heads up. https://youtu.be/DdC5wRZKB-4


Posted by Truth Troubadour at 9:18 AM No comments: Links to this post

The Ballad of Julian Assange – San Francisco Solidarity Rally (3 m 40) Truth Troubadour YouTube Channel. This music video is an excerpt from the 37 minute Labor Video Project report of the SF Rally To Defend Julian Assange that happened at the San Francisco Consulates of Ecuador and the United Kingdom on August 1, 2018. The song was written by Jorma Jorinen of Finland. This is a Vic Sadot solo street singing rendition done for the rally. https://youtu.be/uqBnbYY04Fk


This music video was extracted from this rally report by Labor Video Project and edited by Vic Sadot. Vic was also attending as a citizen journalist. See the link to No Lies Radio below! There are other links to check out below that one, such as #Unity4J

On August 1, 2018 a rally and march was held to demand the freedom of Julian Assange and against the expulsion of him from the Ecuadoran embassy in London. Speaking from New York was journalist, WBAI host and activist Randy Credico as well as OSHA whistleblower Darrell Whitman who was able to use WikiLeaks to find the connection between Obama operative John Podesta and Karen Lerner who ran the Office of Special Counsel OSC which was supposed to investigate and stop corruption in the government. Trade unionists, journalists and civil rights activists talked about the need to defend whistleblower Julian Assange and prevent his arrest and incarceration by the UK and US government. They also marched to the San Francisco UK consulate and also challenged the UK government for it's attack on Assange. Production of Labor Video Project www.laborvideo.org


#Unity4J “Live Events in Support of Julian Assange” playlist at the Suzi 3D YouTube Channel. Subscribe to Stay Informed and to Support Julian Assange and the Journalism of wikileaks! https://www.youtube.com/watch?v=nqB_NhQZT5g&list=PLPf90W3gtZzuJ2V073BXNphPK1Y0bqdKl

Posted by Truth Troubadour at 4:11 AM No comments: Links to this post