by Abby Martin on BREAKING THE SET on RT

This episode of “Brainwash Update” is one of the best and hardest-hitting analyses ever delivered by Abby Martin! And they are all good! For this episode, Martin's "Breaking the Set" YouTube Channel states: "Abby Martin calls out Bill Maher, host of HBO's 'Real Time', for his evolution from being a controversial commentator to being an arrogant lackey for the democratic party, citing his rampant Islamophobia, support for drones, and defense of the NSA's wiretapping program."

Abby's first clip is one from a long ago “Politically Incorrect” show in which Maher claimed that "we" (USA) were the cowards for lobbing missiles in from a safe distance of our adversaries, for which he was fired by ABC. Abby says that Maher has made a complete reversal of positions to “suck up to his corporate masters”, and she goes on a rapid roll-out of evidence to back up what she says. 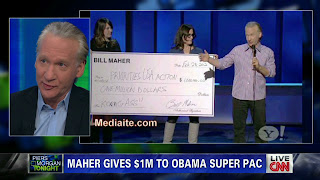 In fact, Maher makes an extremely insensitive and racist joke about Muslims in general in an interview with CIA-trained CNN interviewer Cooper Anderson. Abby plays the clip. Anderson's wikipedia page states, “During college, Cooper spent two summers as an intern at the Central Intelligence Agency. Although he has no formal journalistic education, he opted to pursue a career in journalism rather than stay with the agency after school.” Instead of showing shock and disgust at this demonizing remark, Anderson smiles and lets it stand uncontested, thus encouraging millions of viewers to join in the hatred for billions of fellow human beings. If either Maher or Anderson feared a "real existential threat" from "terrorism" or "Muslims", would they talk like that about Muslims in general? As Abby Martin says, "statistically you are less likely to die of bee sting than a terrorist attack." 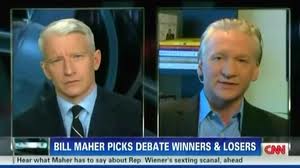 She takes Maher to task for a recent Huffington Post op-ed article by Maher saying that "600 thousand Palestinians (expelled from their country) should have been  mature, enough to move on, the way the Jews did". Abby mocks that one saying, "Yeah, dude, Palestinians just need to grow up! They need to just waltz out of that open air prison and move on with their lives, right? But if that's not offensive enough, just wait! Because in addition to Occupation, Maher supports Stazi-like sureillance too! Just recently on his show he said, "I'm ok with spying now that Obama is in office.” She reams him again saying, "Grow up, man! Your complete trust in Democrats is not going to matter when the same spying program is adopted by the next Republican President. Although that does not matter to people like Bill Maher because his purpose, like that of John Stewart or Steven Colbert, is to be lackey for the Democratic Party." 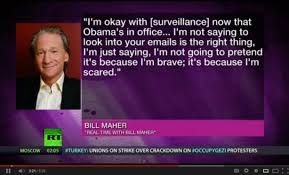 Next she plays a clip of Maher presenting "a giant cartoon check" to the Obama Super PAC (Political Action Committee) fund for one million dollars "while fear-mongering that there is no other choice than to support a war criminal. And any time there's a real change amassing, Maher arrogantly rejects it." We are reminded by Abby of Maher's attempts at character assassination on the millions of citizen volunteers in the American grassroots movement demanding another “New Deal” between the 99% and the 1%, a movement. She points out that Maher once referring to the Occupy Wall Street movement as 'a bunch of douchebags who think throwing a chair through a Starbucks window is going to bring on the revolution'. Abby tells Bill Maher point blank what will bring on the revolution: "Yeah Bill, cuz you know what IS going to bring on the Revolution is giving millions of dollars to perpetuate endless war, the erosion of rights, and a climate of fear and hatred for one another." The Occupy Wall Street movement is better known for occupying public spaces, sharing food, having teach-ins, and holding open public assemblies of direct democratic participation than for 'throwing chairs' even when attacked by militarized police forces in nationally coordinated simultaneous attacks in numerous cities using phone conferences with the "Homeland Security", the FBI, and mostly Democratic Party big city mayors! 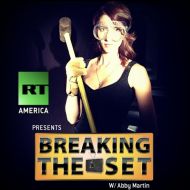 Abby Martin concludes her Maher skewering with a final sledge-hammer blow that is reminiscent of the opening to her "Breaking the Set" TV show where she smashes a TV with a sledge-hammer while CNN's Wolf Blitzer is yapping propaganda and nonsense. Abby skewers Bill Maher with logic, principles, and humor. Political humor at its best because she exposes how one man's journey led him to financial success in a moral wasteland! "How far you've come, Bill! From the days of actually speaking controversial truths to becoming nothing more than an Establishment Puppet! Keeping the masses laughing and superficially 'informed', right? Hey! Whatever keeps the country divided and the money flowing.”

Truth Troubadour leaves you with a humorous and appropriate song to cap off your delightful Abby Martin skewering of Bill Maher experience. Today I chose "LOVE ME I'M A LIBERAL 2011" to dedicate to Mister Maher and his ilk. It's a free song at Sound Cloud/BroadsideBalladeer. Truth Troubadour's version for our times is an update by Vic Sadot of the Phil Ochs 1966 classic Love Me I'm A Liberal. Vic Sadot's 2011 version of "Love Me I'm A Liberal" was released on Sept 11, 2011 under license on the 16 song CD titled "9/11 Truth & JusticeSongs", which remains available on CD Baby! Enjoy the song! And be strong in struggle!

Posted by Truth Troubadour at 12:16 AM No comments: Links to this post