Posted by Truth Troubadour at 6:15 PM No comments: Links to this post

The book that persuaded me that the story being told by the corporate media was a pack of lies was David Ray Griffin's book, "The 9/11 Commission: Omissions & Distortions". The song, "Cheney's in the Bunker", came out of that book, the part about Secretary of Transportation Norman Mineta's testimony being omitted from the final report. Mineta said that a young officer in the White House bunker reported the approach of a jet towards Washington at intervals of 50, 30, and 10 miles out, and that each time he asked Vice President Dick Cheney, "Do the orders still stand?" 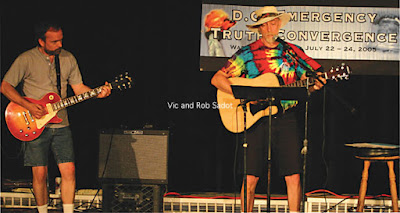 It was an honor to perform songs for that July 2005 DC Emergence Truth gathering! Here is short video of David Ray Griffin and other folks from that July 2005 weekend gathering, which took place in 3 locations: American University, Lafayette Square White House, and the National Press Club. Cynthia McKinney convened hearings in Congress that same weekend, and many of these folks gave testimoney. 9/11Truth 2005 "DC Emergency Truth Convergence" (57:54) 911TVorg


Published notes on Sep 28, 2015: DC Emergency Truth Convergence, Washington, DC, July 22-24, 2005. An unprecedented event conjoining the power of veteran/victim groups, diverse truth and peace & justice movements and the independent and foreign press to out the deadly coup of 9-11-01. This video is just as important today as it was in 2005 when it was never shown because of an audio flaw during DRGs presentation. Now is the time to ponder the timeless message from these tireless truth warriors. Featuring excerpts from the first National Press Club 911 press conference exclusively for indie media & international journalists, and the Lafayette Park 9/11 peace rally right in front of the White House! Held on the same weekend as the Cynthia McKinney Congressional Hearings into 9/11. With Peter Phillips, David Ray Griffin, Paul Thompson at the National Press Club and Nafeez Amed, Jim Marr, Webster Tarpley, Bob Bowman speaking out at the Lafayette Park peace rally. Thanks to 9/11Truth who produced this superb video!" 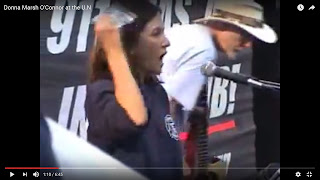 On 9/11/05 I was in New York City singing at a rally at Dag Hammarskold Plaza. In DC in July, David Slesinger had suggested that I write a folk song about William Rodriguez, and he suggested I interview him over the phone. He handed me Willie's phone number and I did exactly as he had suggested. Then I got to meet Willie and sing that song at the 9/11/05 rally and at St Mark's Church of the Bowery a second time. But the sobs and the statements made by Donna Marsh O'Connor at the U.N are something that really made me understand how traumatizing the event was for those who lost family. She had lost her pregnant daughter Vanessa, and she wanted to know where were "the men in the suits" to stand with her to get answers to her questions about the 9/11 attacks. Here is that speech.


The following is a segment with one of the 18 songs presented at Vic Sadot’s “Truth & Justice Love Songs” Concert for the 15th Anniversary of the Crimes of 9/11 delivered in Historic Fellowship Hall in Berkeley, CA on 9/11/16.


Published notes: Vic is introducing the song about William Rodriguez, and Vic is reflecting on his 11 years in the 9/11 Truth movement and how this song came to be written out of attending the 2005 D.C. Emergency Truth Convergence at American University, the National Press Club, and Lafayette Square and meeting David Slesinger. Vic was there to sing his newly written 9/11 Truth songs, “Are You A Citizen Or Are You A Slave?” and “Mad Cowboy Disease”. On 9/11/11 Vic Sadot released a 16 song CD titled “9/11 Truth & Justice Songs”, which remains available at CD Baby. Now there are videos for many of these songs on line at “Truth Troubadour” YouTube Channel and Vic Sadot Vimeo Videos. Vic Sadot will release a new CD in Autumn 2016 titled "Truth Troubadour".

Posted by Truth Troubadour at 7:56 PM 2 comments: Links to this post