Daisy Bram and Jayme Walsh were living their California Dream. They had moved from Iowa to a rural mountain town in northern California where they began to home-birth and raise three children, to grow their own food and medical marijuana, and to integrate themselves into the mostly farming community where Daisy works as a midwife. Then came police raids into their home to seize their children, to put the husband in prison, with Daisy, the mother of three, currently out on bail and speaking out in their defense. Now the three children, Zeus, Thor, and Invictus are under the control and supervision of the Child Protective Services. The seizure of her car has left the young and vibrant mother of three stranded in a rural community with no transportation while facing charges of child endangerment. Fortunately, Daisy has a good lawyer named Michael Levinson working pro-bono on her behalf. There is also a growing community of support around this family's case and a legal defense fund has been established. See GreenAid - Daisy Bram Legal Defense Fund. This is her heart-breaking story. Be sure to watch the video at bottom to hear her tell her story in her own words.

Parents, Pot, and Prohibition: California CPS Stole Daisy Bram's Children Because She Was Legally Growing Medical Marijuana 5-16-13 in OilFreeFun.com - "Daisy Bram has had her three young children taken from her, her husband locked up, and even her vehicle confiscated for growing marijuana "legally" in Northern California. This is the human cost of the for-profit "war on drugs", the for-profit prisons, the for-profit police state, and for-profit pharmaceutical lobbyists screwing up sane governance. Hopefully this heart-wrenching story turns the tide away from institutional insanity and towards freedom of medical choice."
http://www.oilfreefun.com/2013/05/parents-pot-and-prohibition-california.html 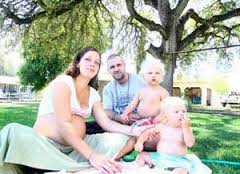 From Reason.com: "In 2011, Daisy Bram and Jayme Walsh lived with their two small children, Thor and Zeus, in Butte County, California. Like so many other people in northern California, Bram and Walsh had medical marijuana recommendations and a small cannabis garden in their back yard. In September, their home was raided by Butte County sheriffs. Bram and Walsh were charged with cultivation of marijuana, possession with intent to sell, and child endangerment. Thor and Zeus were taken by Child Protective Services and placed in foster care for four months. A year later, Bram gave birth to their third son, Invictus. With their Butte County cases still unresolved, Bram and Walsh decided to move their family to neighboring Tehama County. In January of 2013, Tehama County sheriffs raided Bram and Walsh's new home. This time they found a cannabis garden in a locked room off the back of the house. Child Protective Services once again seized Bram and Walsh's children and placed them in foster care, where they remain to this day. On January 30, Tehama County officers seized Bram's car. Walsh is currently in jail with bail set at one million dollars. Bram is out on bail awaiting future court dates. "There is nothing worse that someone can be accused of than doing something to harm their own children. If someone from the government is going to come after someone and make that accusation, they better have the ammunition ready to go," said Michael Levinsohn, Daisy Bram's attorney." 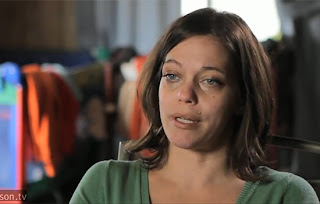 
WEED WARS - State of California v. Daisy Bram (2011-present, Butte County and Tehama County, CA) posted Jan 30, 2013, 11:43 PM by The Editor [ updated Mar 17, 2013, 9:06 PM ] “As of February 2013, Daisy Bram's children, all of whom are younger than three, have been removed from their mother's care and placed in the foster care system by Tehama County, CA authorities. She is in URGENT NEED of a family law attorney, child custody expert, advocate, or community leader near Tehama County to assist in regaining custody of her children (contact The Human Solution). Supporters are encouraged to donate to Daisy's legal defense fund through Green Aid. (Active links at the article site!) Daisy Bram and Jayme Walsh no longer enjoy a quiet life off the grid in rural northern California with their three children, living by the motto "Live simply so others can simply live." Like other residents of remote Concow, CA (near Oroville in unincorporated Butte County), Daisy and Jayme produced their own food and traded the bounty of their organic garden with other locals. Daisy Bram, a midwife who delivered her two youngest children at home, delivered another mother's baby into this world in January 2012, but her own three babies no longer live in her healthy, loving home. The children have been medicated against Daisy's will while in foster care and her newborn was switched to a formula diet in direct opposition to all of Daisy's natural spiritual motherhood ideals and practices.” Read more at:
http://www.unitedstatesvmarijuana.com/court-cases/stateofcaliforniavdaisybram 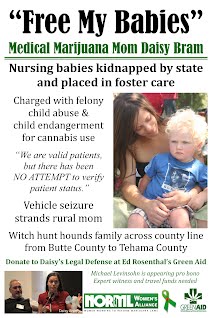 Posted by Truth Troubadour at 12:24 PM 2 comments: Links to this post