The schedule and link was posted by James Tracy at Memory Hole Blog Worldwide 9/11 ReThink Post, and many people Re-Blogged it on line. Memory Hole Blog is a good place to explore how a professional media studies professor uses what he has learned to foster a discussion in an atmosphere where there are no taboos, but likewise, little tolerance for stuff that does not even pass the smell test. Recommended by Truth Troubadour Blogspot!
http://memoryholeblog.com/2015/09/11/worldwide-rethink-september-11-event-begins-tonight


The event is being recorded to be available after 9/11/15 in an archive. There's supposed to be a live chat box too, if you can find it. These are some screen-shots that I took from today's broadcast, which is now ending. The discussion begins again tomorrow Sept 12, 2015 at "11 am Toronto / 8 am California / 5 pm UK / 8 pm India – Introduction by Bev Collins" at the same link http://www.rethinkseptember11.com 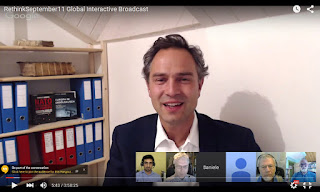 Daniel Ganser is the founder and the director of the Swiss
Institute for Peace and Energy Research (SIPER). 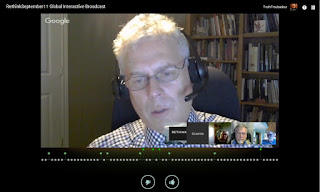 Truth Troubadour recommends Graeme MacQueen's new book The 2001 Anthrax Deception: The Case for a Domestic Conspiracy published by Clarity Press.  He talked about how the 9/11 attacks and the subsequent anthrax attacks using US Army Ames Strain anthrax to murder several people and to shut down and terrorize Congress itself as part of the same event that was done by the same perpetrators. 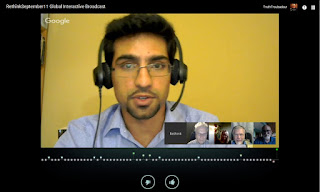 Adnan Zuberi came up with the idea for doing this 2015 9/11 on-line discussion with Bev Collins as Co-Host. It is quite noteworthy that this group examines recent possible Canadian false flag events. Adnan Zuberi created an excellent documentary on the state of denial and intimidation in regard to 9/11 within the academic community. It was featured at the Northern California 9/11 Truth Alliance annual film festival and also at Historic Fellowship Hall in Berkeley where it was live-streamed by Allan Rees of No Lies Radio. The main link for the movie is  http://911inacademia.com

Tony Hall, known as Antonius Hall on Facebook, and Anthony J. Hall, the professor and the author. Anthony Hall is an articulate academic who can speak the language of the common man whenever useful to make his point. He has been an avid supporter of Native American and Inuit rights, and much of that is articulated in his revisionist historical writings. See the Amazon Link for Earth into Property: Colonization, Decolonization, andCapitalism (McGill-Queen's Native and Northern Series) published Aug 23, 2010. .


Barrie Zwicker seemed to be in good spirits today! He was enjoying some solid intellectual and ethical company that he has come to know over the years. 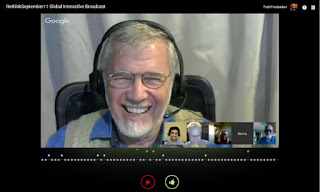 In 2006 Barrie Zwicker published his book, The Towers of Deception: The Media Cover-up of 9/11. The corporate-government news media "have monolithically failed to ask elementary questions about anomalies in this story. So-called alternative media have been little better. Towers of Deception explains why and prescribes actions to break out the truth". 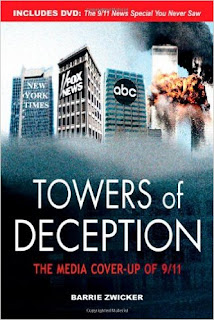 (FULL) 9/11 - The Great Conspiracy - The 9/11 News Special (1:10:22) TheMediaCorruption YouTube Channel. Now video #51 in the “9/11 & Other False Flag Investigations” playlist at Truth Troubadour YouTube Channel by Vic Sadot. Original published notes: “THE GREAT CONSPIRACY: The 9/11 News Special You Never Saw The 9/11 News Special You Never Saw is a 70-minute sequel to The Great Deception. That is a ground-breaking 44-minute video also by Barrie Zwicker. He was the first mainstream journalist in the world to go on air (in January 2002) and ask hard questions about the official story of 9/11. In The Great Conspiracy, Zwicker updates and expands his critique. He analyses the use of fear to befuddle the public. He deconstructs the so-called "war on terrorism." He examines in depth the failure of the military on 9/11 and George Bush's highly inappropriate behaviour that day. He finds the 9/11 Commission to be a total coverup operation. Throughout, he analyses the role of the mainstream media as complicit in keeping the public massively misinformed and befuddled. And he suggests what we can do.”

Blowback or Bloody Treason video of one of the songs on the 9/11/11 released "9/11 Truth & Justice Songs" CD by Vic Sadot. Blowback or Bloody Treason was created after reading Crossing the Rubicon by Michael C. Ruppert, who I was referring to in the song chorus but I used TV detectives in the video saying: “We need a great detective's logic! Forensic facts & laws of physics! Not leaps of faith! Just steps to reason! Was it blowback, or bloody treason? Was it blowback or, ... bloody treason?”