Another Nineteen: Investigating Legitimate 9/11 Suspects An interview at Global Research TV by James Corbett with chemist, author, and 9/11 investigator Kevin Ryan about his new book. Why were these questions that are obvious to any crime investigation not pursued? Who had means, motive, and opportunity to pull off such an operation that included standing down US forces, making sure that targets were hit, pulling buildings with demolition explosives, and covering up evidence after the crime? Who benefited to what degree? Why were those who failed to defend the USA on that day not fired, demoted, or prosecuted? Why were they all instead rewarded with promotions and given more power and money? Kevin Ryan has another 19 suspects for us to consider. 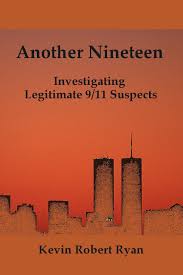 Posted by Truth Troubadour at 4:26 PM No comments: Links to this post

Tickets: $10 at the door. Watch this Event Online! This event will also be live web streamed byNoLiesRadio.Org, a Pacifica affiliate on-line only radio station in the SF Bay Area. Tickets are $5 to view. The Web-stream start times: 2 pm Pacific * 5 pm Eastern 21:00 GMT 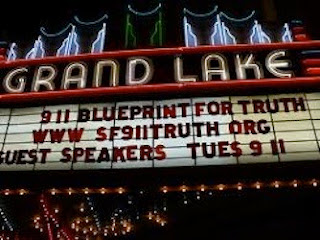 Photo from a previous annual 9/11 Truth Film Fest.
This year 9/11 falls on a Wednesday.

If you cannot come to the Grand Lake Theater, listen from anywhere in the world via the "Live-Stream No Lies Radio Broadcast” of the speakers and the films at this year's "9/11 Truth Film Festival" goes from 1 - 11 pm on at 3200 Grand Ave in Oakland, California 94610. This year's "Fifty Years of Betrayal - From JFK To Today" reflects the broad spectrum of films to be screened. Don't miss it!! $5 for web ticket includes access to the live stream and afterwards to all of the archived films and speakers until Sept 30th.

Visit the Facebook page for the annual 2013 "9/11 Truth Film Festival" at the Grand Lake Theater in Oakland.

Movies to be Shown:
Jekyll Island: The Truth Behind the Federal Reserve
Counter-Intelligence by Scott Noble
Project Censored the Movie: Ending the Reign of Junk Food News
9/11 in the Academic Community
Who Killed Martin Luther King?
NATO’s Secret Army
Plus, films covering the assassinations of JFK, RFK, MLK, and more! 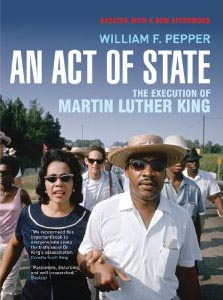 Come join us for our annual event, including films, music and speakers. 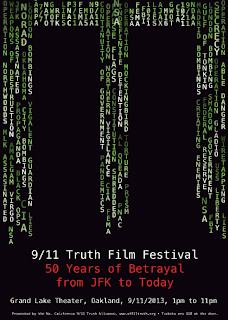 Vic's other blogs are "Berkeley Calling" at wordpress for news about free speech action in the SF Bay Area  and "Broadside Balladeer" at Blogspot for writings about radical roots political music.

No Matter What Hollywood Propaganda Movies Say, Torture Is A Crime and Questions about the Death and Dumping at Sea of Osama bin Laden Remain 3-30-13 Truth Troubadour Blog: Osama bin Laden: Dead or Alive? If he is dead, when did he die? Was he really the "mastermind of 9/11", or not? How can we know the truth? An exploration of these subjects by Truth Troubadour Vic Sadot, a member of the Northern California 9/11 Truth Alliance.
Posted by Truth Troubadour at 1:54 PM 1 comment: Links to this post